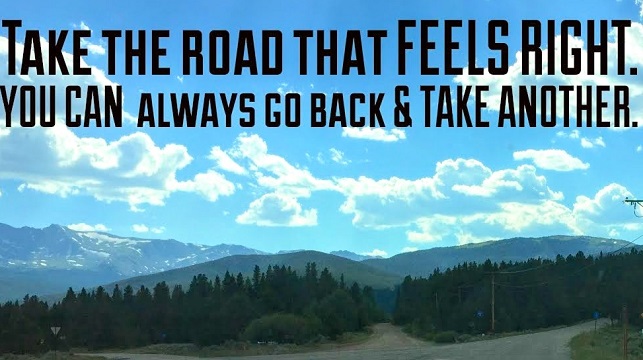 You’re probably familiar with Robert Frost’s poem The Road Not Taken, which ends with the famous lines:

“Two roads diverged in a wood, and I –

I took the one less traveled by,

And that has made all the difference.”

But, did you know it’s one of America’s most misread poems?

In the end, the poet thinks about one day telling the story and probably saying, “I took the [road] less traveled by, and that has made all of the difference,” even though the roads really looked the same.

Here’s the entire poem, if you’d like to check it out.

you can always take another.

We like and sell sunglasses. We also write about them. Check out more of our posts HERE.

Happiness is contagious, so spread some love today by focusing not only on others but also on yourself.

When you’re feeling good, others around you will too. We often spend too much time trying to make others happy, and we end up draining our own happiness.  That, in the end, doesn’t make anyone really happy at all.

Don’t confuse this with selfishness; if you’re reading this post, then you’re likely the kind of person who gets joy by giving joy.

Do what makes you joyful today.

Brighten someone else’s day by brightening your own.

We like and sell sunglasses. We also write about them. Check out more of our posts HERE.

© Native Slope and NativeSlope.com, 2018. Unauthorized use and/or duplication of this material without expressed and written permission from this site’s author and/or owner is strictly prohibited. Excerpts and links may be used, provided that full and clear credit is given to Native Slope and NativeSlope.com with appropriate and specific direction to the original content.